Does this sound familiar? You buy a synthesizer and then, after some time, you want to sell it again. Years later you find yourself looking for the same instrument again.

Maybe you just feel a little nostalgic (“I SOLD mine?”) … or you find a really cheap one (“190 Euros? That’s a bargain!”). Maybe you just get curious (“I couldn’t stand that aspect of it then, but eventually things have changed ..?”). 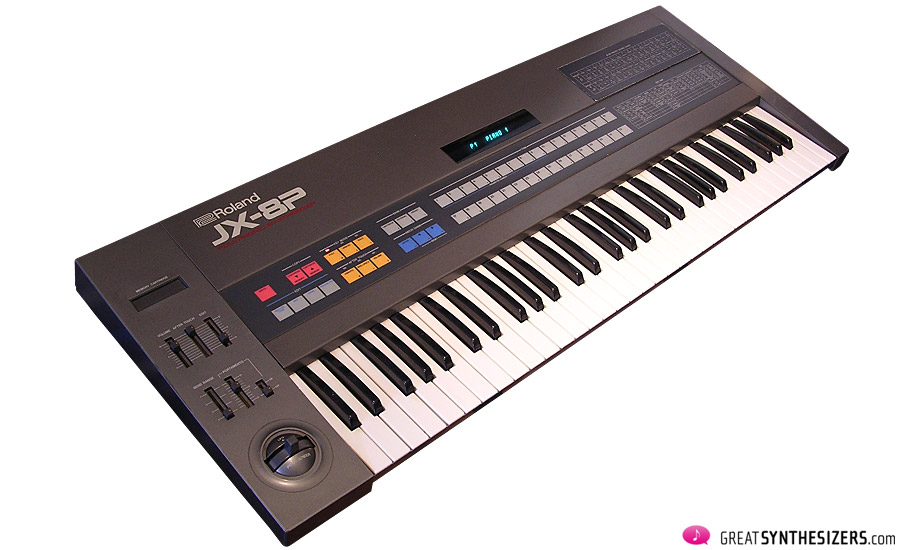 Anyway … if, for some reason or other, you buy that same synthesizer again, you may be astonished at how gooooood it sounds. Paying the low price was worth it, there was a reason for you feeling nostalgic and your taste has completely changed for the better.

So you’ve matured some years and know that – as with people – no synthesizer is perfect. 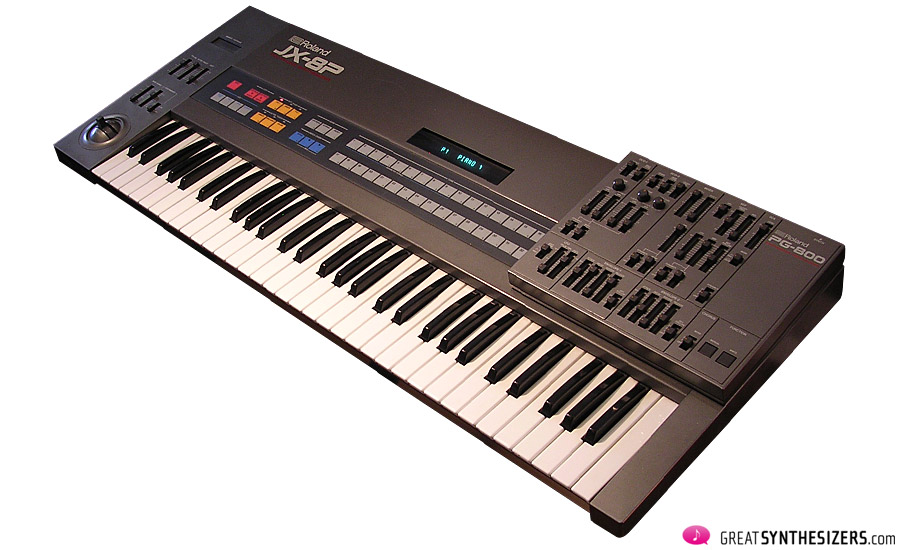 But you’re able to correctly evaluate the strengths of the instruments. Fast envelopes aren’t the only criteria for electronic happiness and DCOs have lost that “second choice” stigma.

You see that the feel of the keyboard is astonishingly good and you come to terms with the fact that your taste has been prone to error and, in fact, has changed. 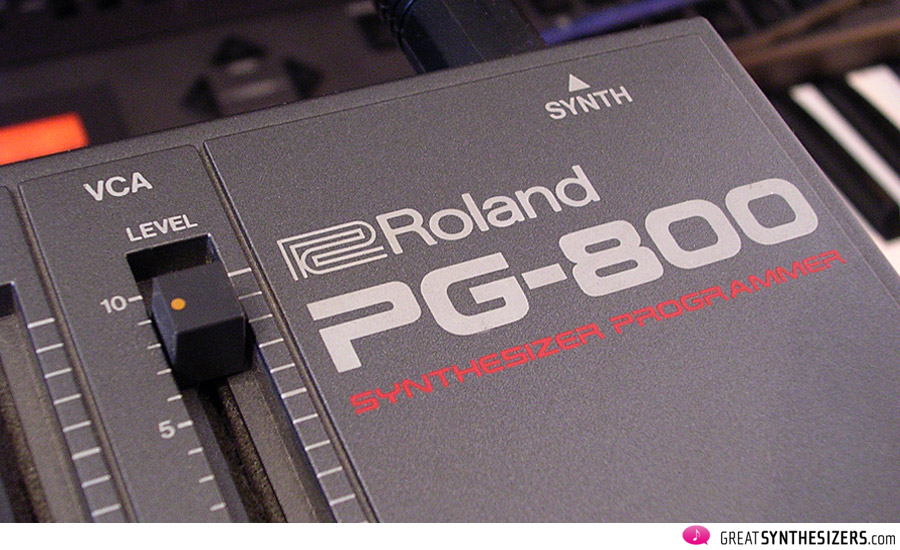 If a buddy adds a nice programmer PG-800 to the instrument, new acoustical worlds lay at your feet. If it’s a Roland JX-8P – great! If it’s a SUPER JX-10 … even better!

Interesting name. “Hello QZ-22eb-4” … ok, let’s stop joking. What the hell is “JX-8P”? “P” might stand for polyphonic (or maybe programmable), alright. And the “X” might be chosen with reference to the Yamaha DX-series… 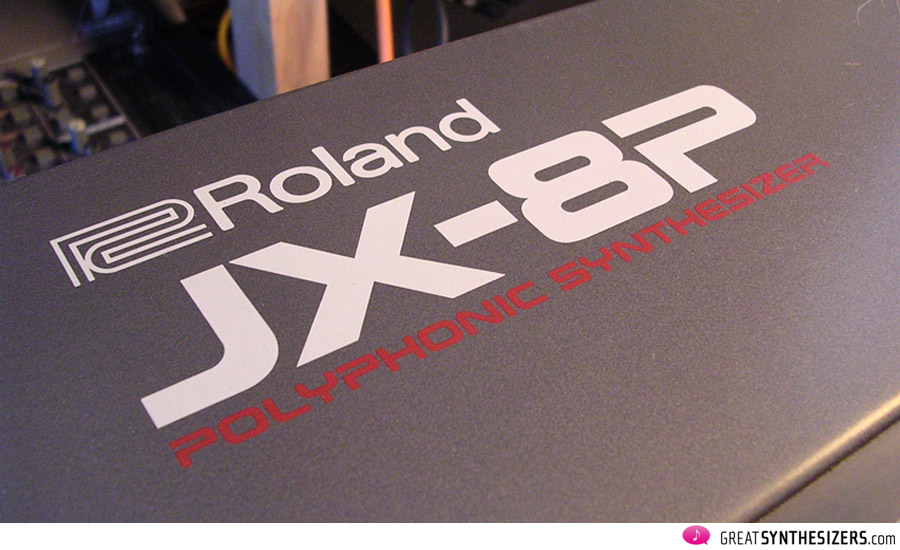 “J” always matches with almost any Roland synthesizer (Juno, Jupiter, JD, JV, JX…), but what about the “8”? The Jupiter-4 was four voice polyphonic, its bigger brother Jupiter-8 eight voice polyphonic. We all got that, as this was concrete information coming with the instrument’s name.

Now, playing the JX-8P I’d expect the synthesizer to be an eight voice machine. Far from it! It’s six voice, that’s all. And its bigger brother – SUPER JX-10 – is a 12 voice synthesizer that somehow lost the “P”olyphony in its name. 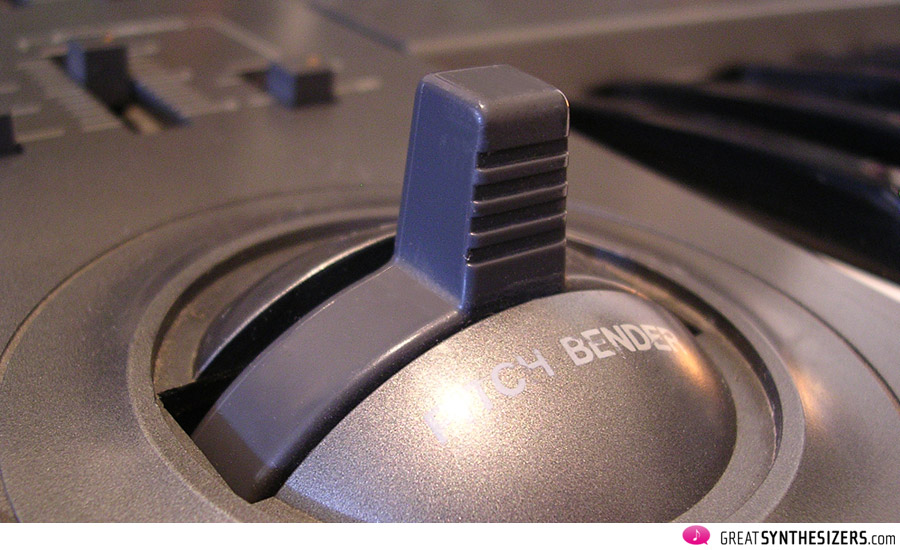 Just to make things a little more complicated, the JX-10 rack version is called MKS-70, and the synthesizer programmer for all machines (JX-8P, JX-10 and MKS-70) is the PG-800. Once you you’ve sorted out the chaos in Roland’s JX-terminology, it’s time to have a closer look at the instrument’s features… 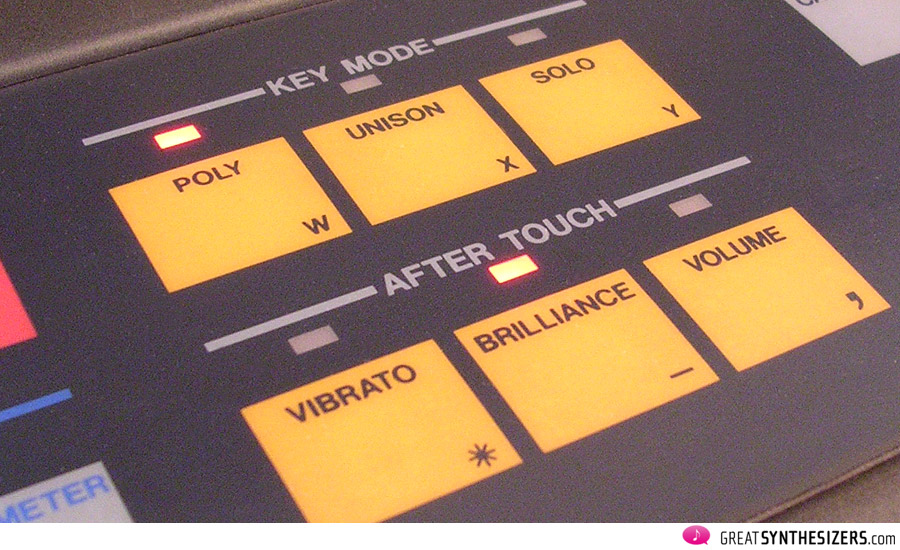 The Roland JX-8P spots DCOs, just like its predecessors Juno-60 and Juno-106. Twelve of these (two per voice) are to be found in the machine, with the standard analogue waveforms saw, standard pulse, narrow pulse and noise. Sadly, there’s no pulse width modulation! But you get cross modulation! That’s useful for any metallic, strange sound, similar to a ring modulator. And there’s osc sync as well…

The DCOs sound very good, in fact they are analogue modules with digital frequency control, as you know. So, VCOs and DCOs don’t sound that different. Elka’s Synthex features DCOs, too …

Back to the JX-8P. DCO modulation can be done via LFO and/or ENV. The second DCO sports a rare feature that allows volume modulation via ENV. Since velocity can control the level of envelope amount, you’re able to create organic textures with the second DCO coming and going depending on the amount of velocity.

As on many Roland synths, there’s the classic LPF – HPF combination. The HPF is a three position static high pass filter, whereas the LPF offers sliders for frequency and resonance plus various modulation options: LFO, ENV and Key Follow. 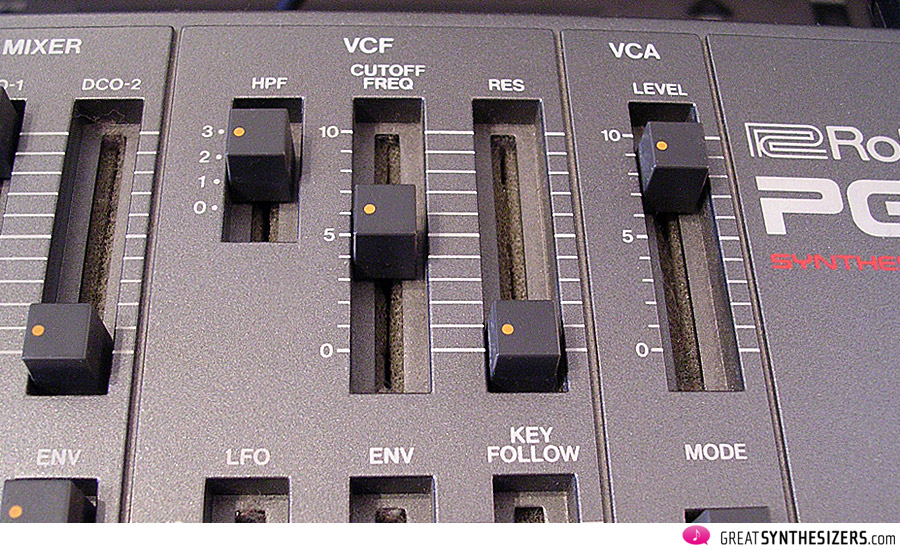 “Dynamics” controls the amount of velocity-to-envelope via a three position slider. The

… are fully equipped ADSR types, one each for VCA and VCF. The envelope attack is a little soft compared to other Roland Synths (compare the JX with any Juno- or Jupiter-synth). So you feel inclined to use the JX-8P more for string and vocal textures rather then for aggressive, ripping sounds.

Roland’s beautiful stereo chorus gives the JX-8P a lot of depth and warmth. Sure, it’s a little noisy, too. But it sounds rich and broad, and results in deep, warm analogue sounds with a nice stereo image.

One of the instrument’s best features is its highly responsive 61-note keyboard with velocity and aftertouch. I had forgotten about that … the JX is so much easier to play than any Jupiter synthesizer (except the MKS-80, of course). Direct keyboard control of the envelopes (velocity) and of either vibrato, brilliance or volume (aftertouch) turns the JX into a serious, powerful instrument. 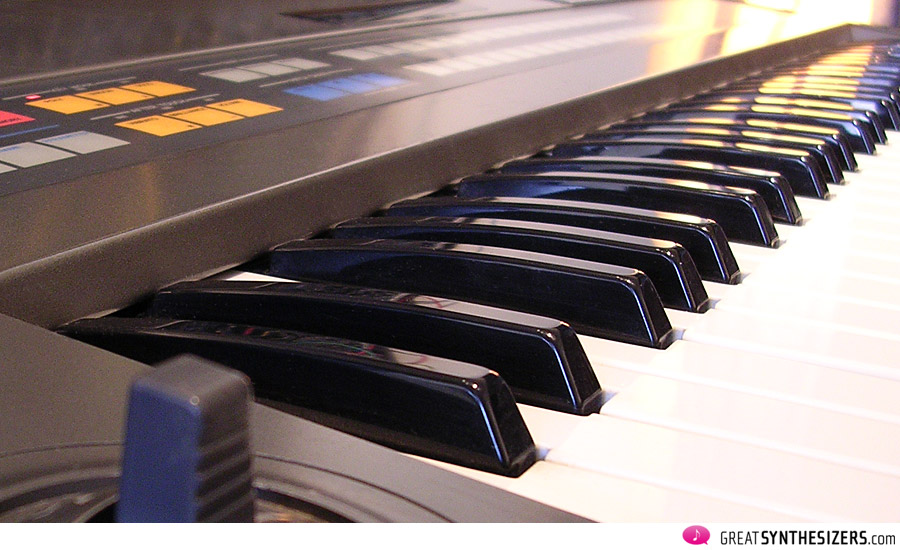 Sure, the JX-10 is even better! Its 76-note superbly weighted keyboard has one of the best actions to be found. Sadly, the aftertouch isn’t that responsive (at least on the JX-8P). You need touch & go and force to get it to work …

Sound example “longsolo” is a smooth, long synth solo that explores the JX-keyboard’s sensitivity. Take your time listening to it …

Considering that the JX-10 contains two JX-8P, I’m going to be on the lookout for that flagship one day (again, ups … I already owned it). It’s a strong candidate for a “main instrument” …

Like the JX-3P, the 8P has its own programmer. It uses sliders (instead of knobs) and helps you get the best out of your JX-machine. The PG-800 is the key to the instrument’s heart. As Peter Forrest says:

“The 8P and the 10 can both sound very middle-of-the-road until you start getting stuck into some experimentation with the PG-800’s neat little sliders.” (The A-Z Part II, revised edition, page 113) 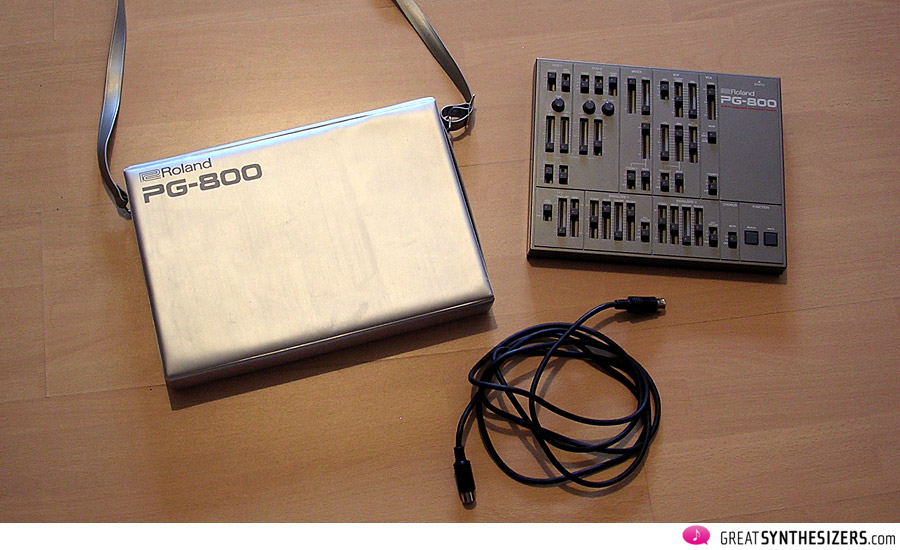 The programmer allows direct access to most of the instrument’s sound parameters. No wonder it’s a lot more fun tweaking the PG-800 than stepping through the JX-menu. And once you realize that any sound change can be effected within seconds, you will never want to part with the PG-800 again.

The JX-8P sounds warm. At least as soon as you use the chorus, which is involved in most of the instrument’s presets in some way. The dual oscillator design, coupled with the respectable filter and the separate VCF/VCA ADSR envelope generators results in richly analogue sounds that may take you a long way towards the clarity of those early digital synths. Although it’s often described as a “hybrid” machine, I’d prefer to put it in the analogue corner. Sure, the JX offers some DX-like voices and some sounds similar to Korg’s DW-synths. Thanks to velocity and aftertouch, it’s also a joy to play. The keyboard turns the JX into a professional instrument, full of powerful and intriguing sounds. No wonder many electronic pop artists of the 80ies used this machine. Human League, Madonna, Elton John, Grace Jones (JX-10), just to name a few. 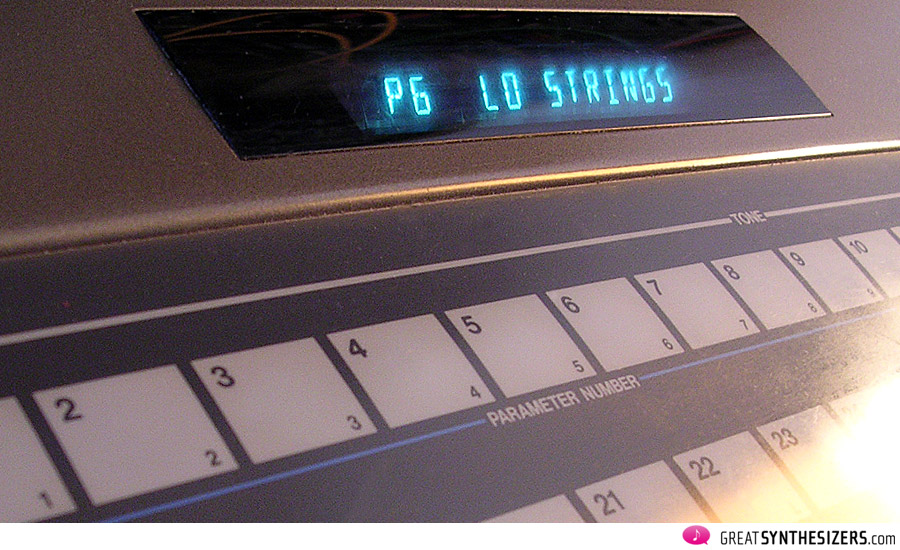 I like Julian Colbeck’s review of the JX-10, so let me sum up his description of the instrument’s sound. Although he’s talking about the JX-10, it may just as well be the 8P …

“The range and depth of sounds lurking in the JX is vast. Imagine a Yamaha DX7 crossed with a PPG crossed with a Jupiter-8. Beautifully rich strings can precede bells and cross-mod sounds, fat brass patches (in fifths, perhaps) can follow the most sumptuous digital pianos. A delight to listen to.” (Julian Colbeck, Keyfax 4, page 69) 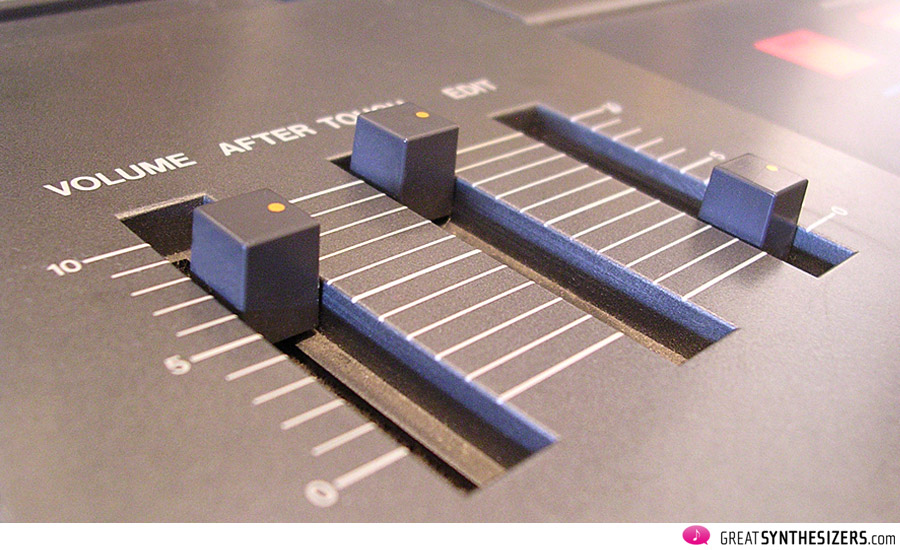 It might be a little exaggerated to compare the JX with a Jupiter-8, but still… the warm, analogue (string) sounds are beautiful …

That soft attack does not allow for punchy, percussive sounds. If you’re looking for snappy sequencer -type tones, you might be better off using an SH-synthesizer, or any Jupiter for that matter. Still, there are heaps of professional features on the JX that turn it into a highly respectable machine. I haven’t mentioned UNISON yet. 12 DCOs may be a guarantee for sonic overkill. The SOLO mode ought to be used in combination with portamento, giving you a monophonic lead synthesizer. But after all, most of the instrument’s expressive quality originates in the wonderful keyboard action…

The limitation to six voice polyphony is a little drawback, of course. Pad sounds with long release, clearly audible in some of the samples, suffer from those polyphonic limitations. Again, the JX-10 features 12 voices and might be your better choice!

Coming back to the JX-8P after a gap of 15 years, I was totally amazed at its warm, deep and expressive sound character. Being used to Jupiter-4/6, Synthex, OBX and other polyphonic analogue instruments, the touch sensitive keyboard of the JX is an extraordinary joy to play. One day I’ll look out for the JX-10 again, though, just to get Roland’s last big push in analogue superstardom. 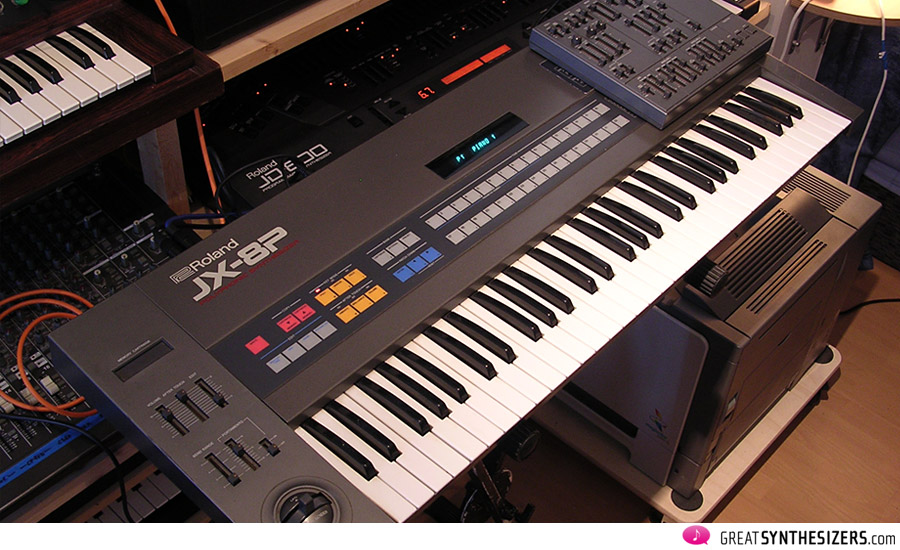 Last but not least, the JX-8P is an affordable instrument. You can fetch a nice unit for less than 250 Euros. Considering all those lovely strings and superb pads, the JX-8P is one of the most recommendable analogue polyphonic (MIDI) synthesizers available. Catch one if you can … 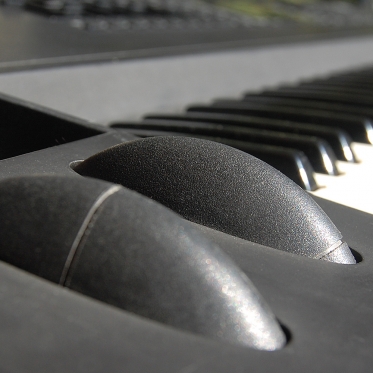 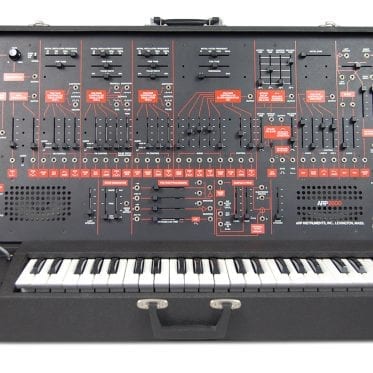 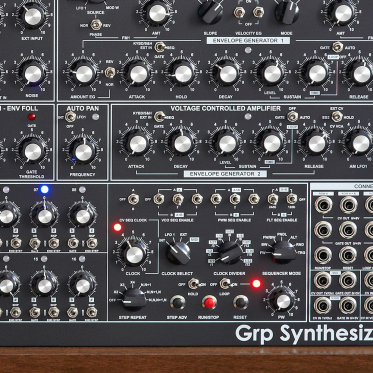 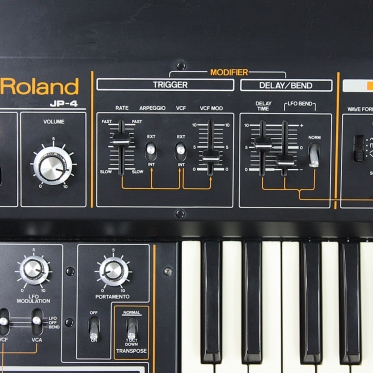