Korg is definitely going on the right direction. They’ve brought the analog technology back, and they’re doing very well at that, thankfully. From the Monotron to the recent announcement of a remake of the ARP Odyssey, they certainly know what a big part of the market wants. They create more excitement than any other synth company in the world. Their synths sell out at the moment they’re on the street, and some of them have waiting lists for months. 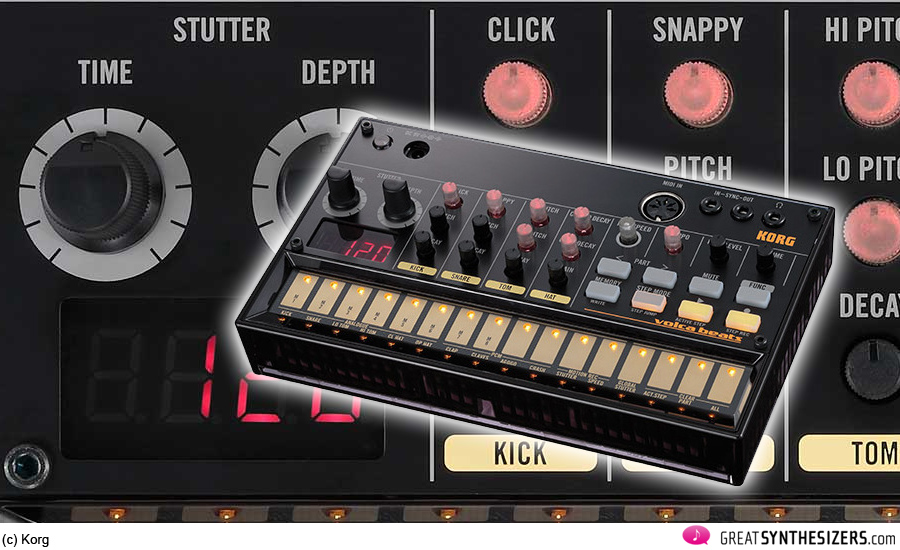 The Volca Series are part of that family, a kind of an attempt of making inexpensive groovebox machines.

Volca Beats is clearly a drum machine, a hybrid one, combining analog Kick, Snare, Toms and Hi-Hats, with samples of Claps, Claves, Agogo and Crash Cymbal. The Volca Bass is a three oscillator analog bass machine, with a Roland TB-303 style sequencer and design. Finally, the Volca Keys is three voice paraphonic analog synth, with a digital “analog style” delay and step sequencer. They all have extensive MIDI capabilities, like control of their internal parameters with CC messages, synchronizing the internal sequencers with MIDI clock, etc. You can even connect them through analog clock and synchronize between them or with external analog gear.

They all cost around US $150 each, which is ridiculously cheap.

Korg has been a little mysterious about the source of the filters on the Bass and Keys. There´s contradictions about whether they are copies of the vintage Korg 700S, one of Korg´s first synths ever. They definitely sound different, and they’re are supposed to be modified to sound different, but to be honest they sound too different for me to believe that. I think I solved the puzzle though. Just keep reading… 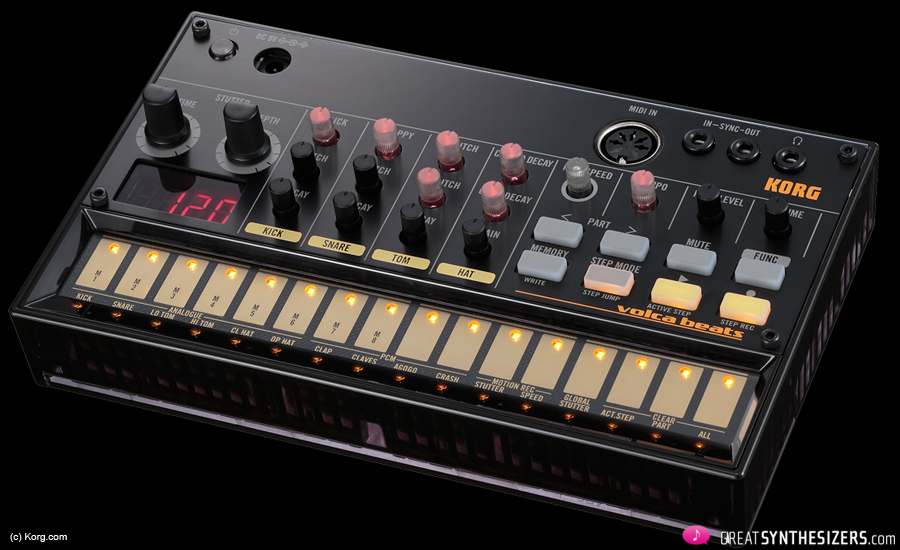 The Volca Beats is a cute drum machine that can generate analog and digital sounds. Each of the sounds has independent volume control, but they are all adjusted with just one knob after you’ve selected the sound you wanted first.

The Kick drum is great. It has three controls: Click, Pitch and Decay. It sounds more 808 than 909. The Snare is probably the weakest of all, it sounds distorted, dark, lifeless. 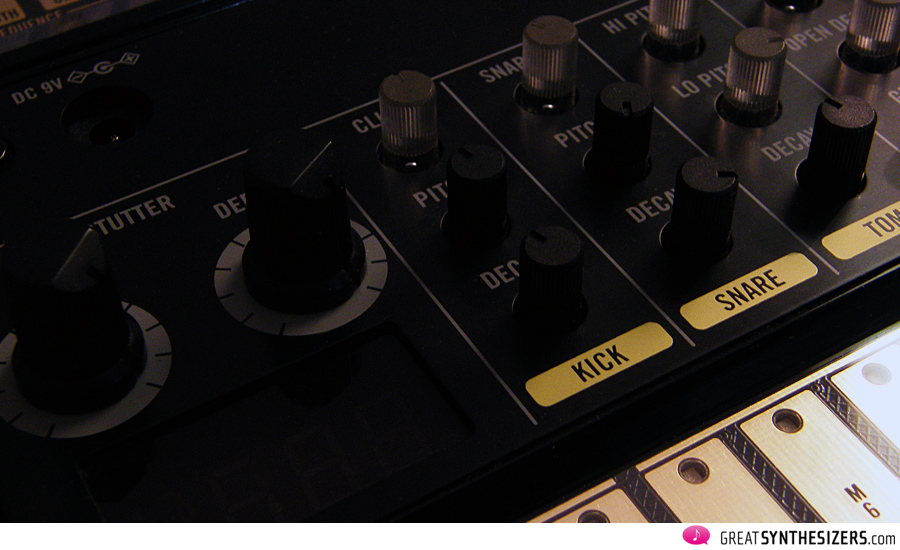 Some people say there’s a design error, and offer a way to modify it. It really improves, and it makes it sound more 606 or DR-110. Snare parameters are Snappy, Pitch and Decay. Next come the Toms, which are really nice, fat, dark. You can control the Pitch of each (Hi and Lo), and their Decay.

The Hi-Hats are nice too, with a big variety of sounds thanks to the wide range of its Grain parameter. Independent decay for closed and open Hi-Hats are also provided. 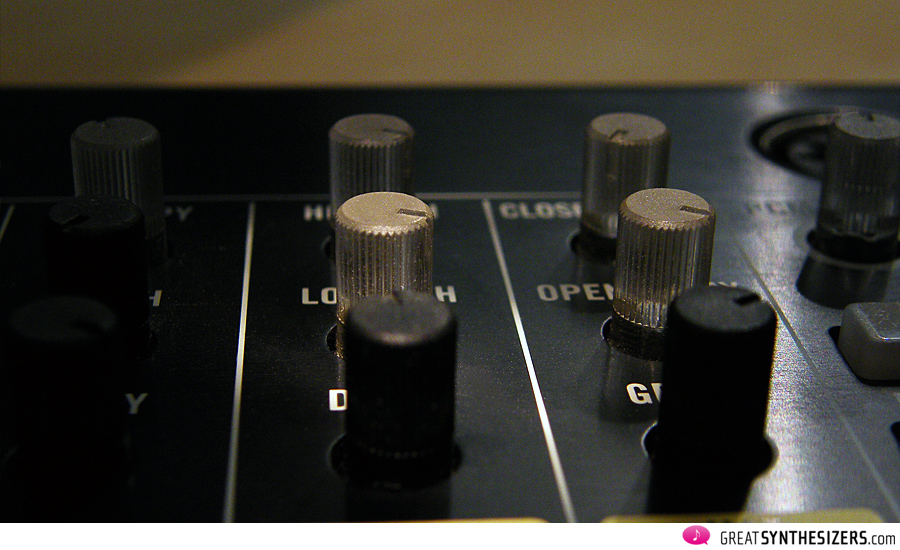 The next four sounds (Clap, Claves, Agogo and Crash) are LO-FI digital, and they only have one sound parameter each: PCM speed, that changes the pitch of the sounds.

The sequencer has Step and Real Time recording modes, very much like a TR-909 or DR-110. Like all other Volcas, its sequencer has a memory of 8 patterns, with 16 steps each. Very little memory as you can see, sadly. 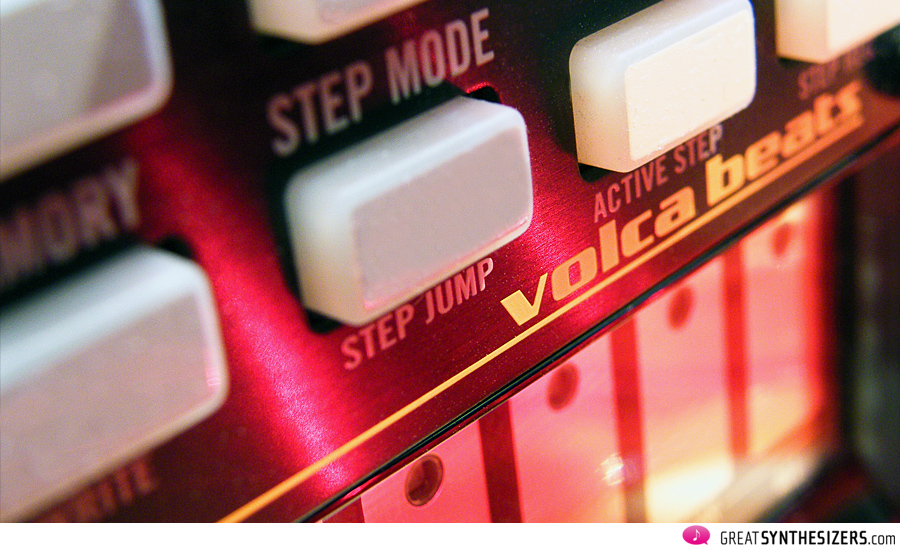 There’s a nice effect called Stutter, which retriggers a sound that you choose, or all sounds, to create variations, fills, etc to the patterns. You set the note length of the retriggering with the Time knob, and the Depth knob defines the repetitions. It’s a really cool effect, but as with the delay on the Volca Keys, it’d be more useful if you could select between only binary or only ternary figures so you can turn the Time knob without falling into a triplet figure while you’re on a binary pattern, etc. 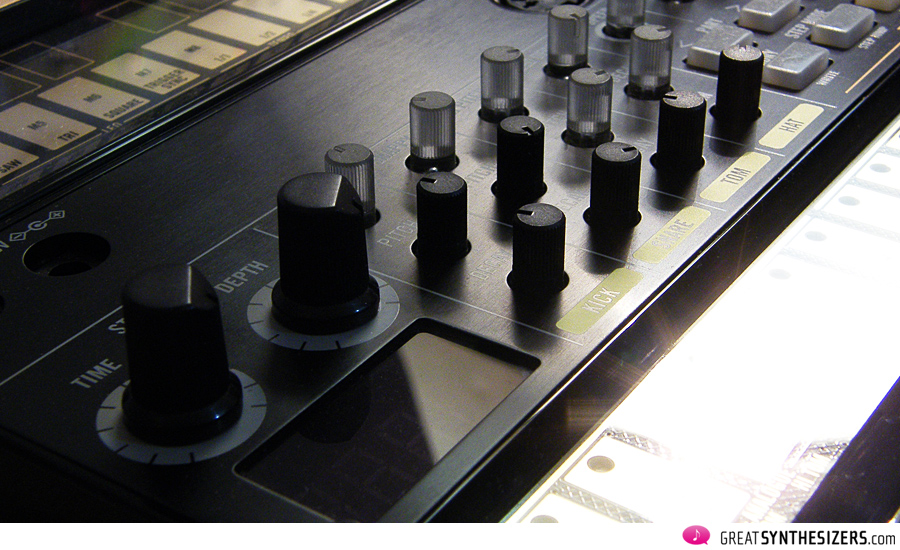 Two parameters, Stutter Time and Speed of PCM samples can be recorded in realtime, which is nice, but it would have been interesting to automate the analogue parameters as well. 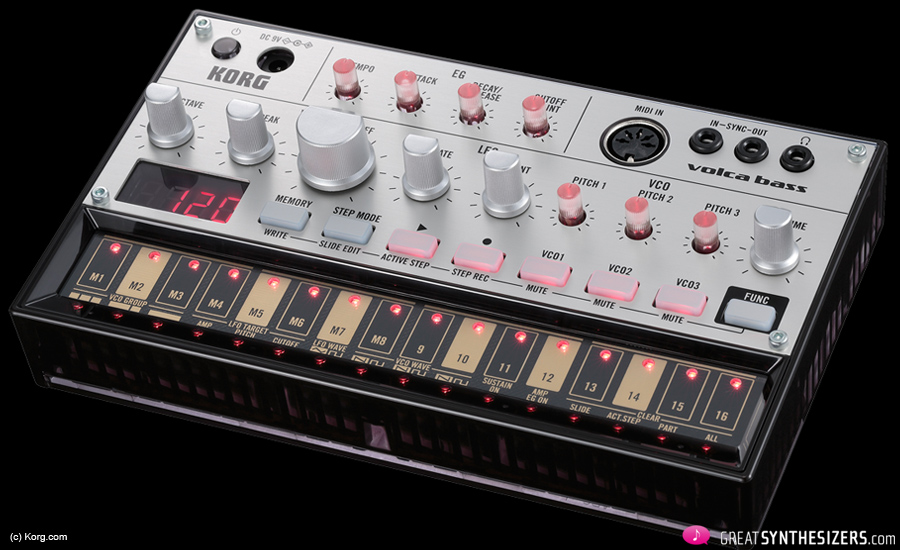 The Volca Bass is an amazing little three oscillator synthesizer, which can be used for bass or any other synth sound. In fact, the name “Bass” has more to do with the fact that it´s styled similar to the Roland TB-303 “Bass” line synth. But to be honest, I feel the Volca Keys has better low end and can make more defined bass sounds. But the thing is, the “Bass” synth can make fantastic basses, leads, sequences, etc. It just sounds great.

You can choose the waveform of each oscillator between saw and square, detune each oscillator with a range of +/-1 octave, but you don’t have independent volume. Only On/Off for each. You can transpose the keyboard with the Octave knob by 6 octaves, but that won’t transpose if you’re playing the synth via MIDI. 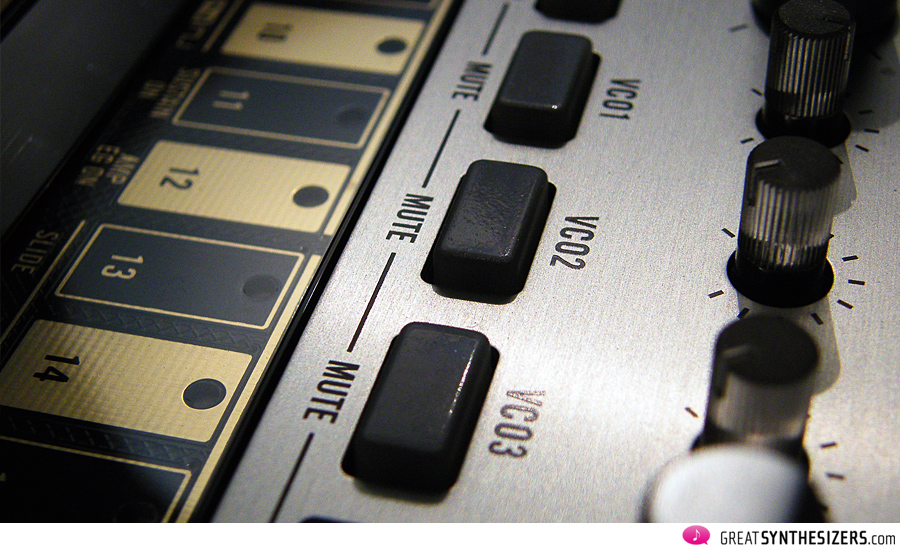 Regarding the filter, I was intrigued by all the rumors and desinformation, to me the Bass filter´s sounded very much like the MS20 LPF, and very different from the Volca Keys. Now I can confirm it, cos’ I compared the Bass and the MS20 mini and they sound very close, not identical probably because both synth´s oscillators sound different (the MS20´s sounds more bassy), but close enough to know that they are basically the same.

The filter definitely scream like a pork, but the distortion is very different from the one on the Keys. Is the Keys a copy of the 700S? Keep reading… 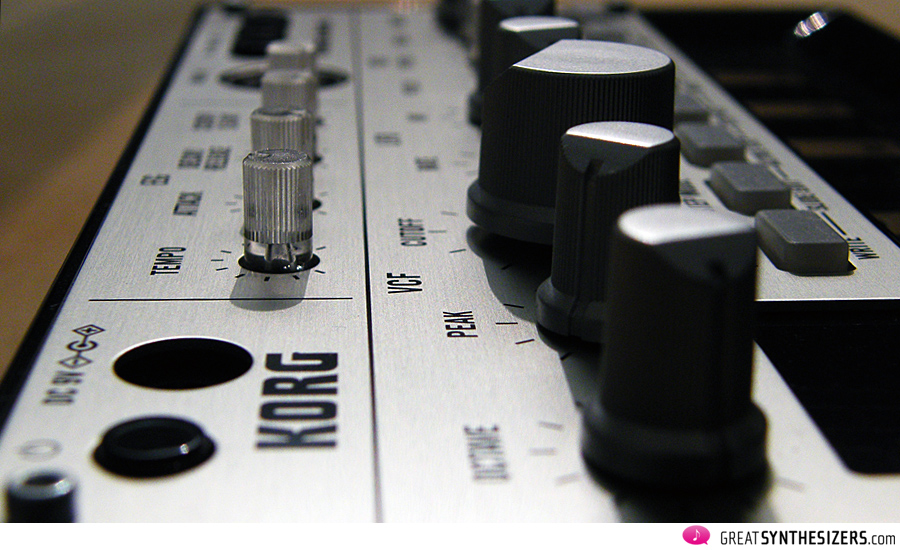 The knobs are really nice, and better than the ones on the other machines. The cutoff knob is the biggest, the Octave, Peak (Resonance), LFO Rate & Int and Volume are similar but smaller. The rest are the ones of the Monotron and the other Volcas, very small, transparent and led-lit mini knobs.

It feels weird to have Peak at the left of the Cutoff, and I’d prefer to have bigger knobs for Attack, Decay and Cutoff EG Int and smaller ones on the LFO controls. 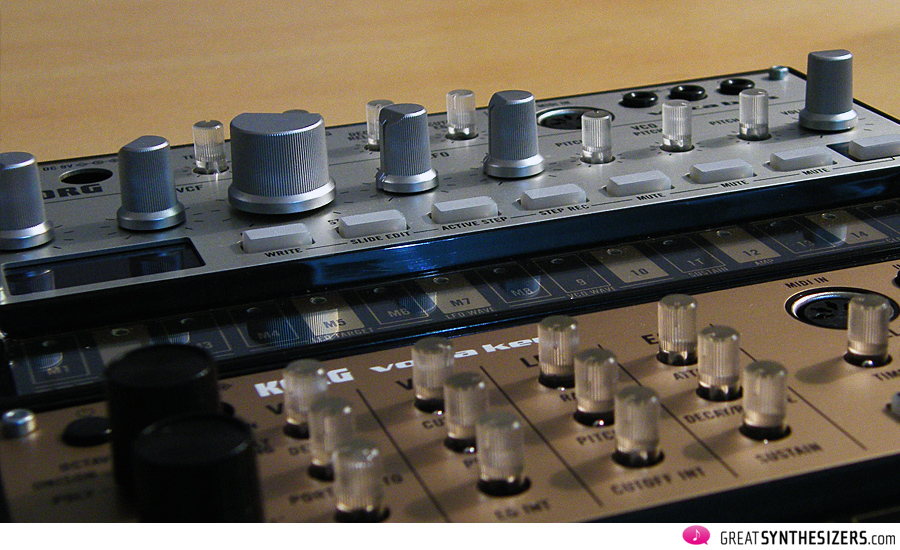 The envelope is a simple Attack/Decay (and Release) affair, and it can modulate the VCF and VCA, although you can disconnect it from the VCA and use the gate of the note to control the volume. There´s also a Sustain On option so you have a sustain at maximum level while you hold the notes.

The LFO can control the VCOs, the VCF and the VCA, or any combination. The waveform is either a triangle or a square. It can go really fast, but its intensity isn’t very wide. 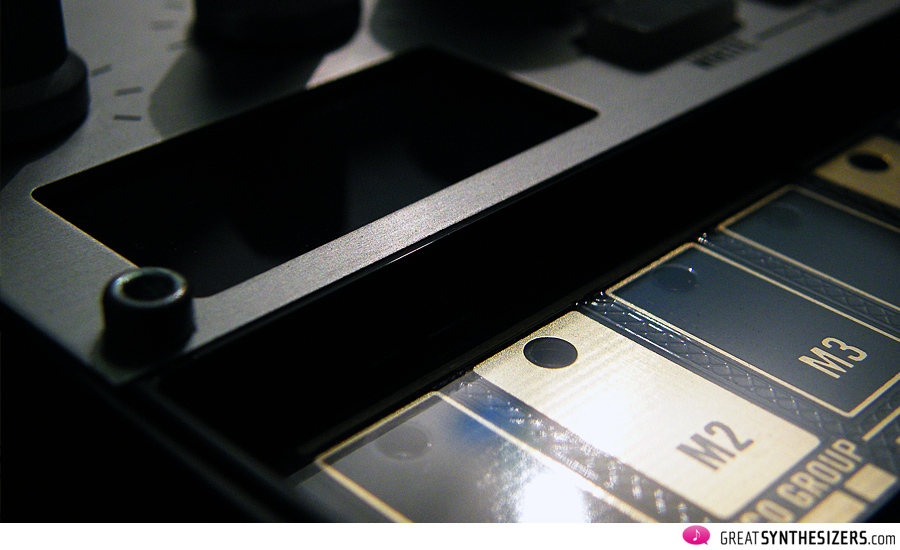 The sequencer is very intuitive, with Step and Note modes, Slide Edit and independent control of each oscillator´s pitch. This paraphonic feature is similar to the Keys approach, except the Keys also works paraphonically in realtime via its keyboard and MIDI. 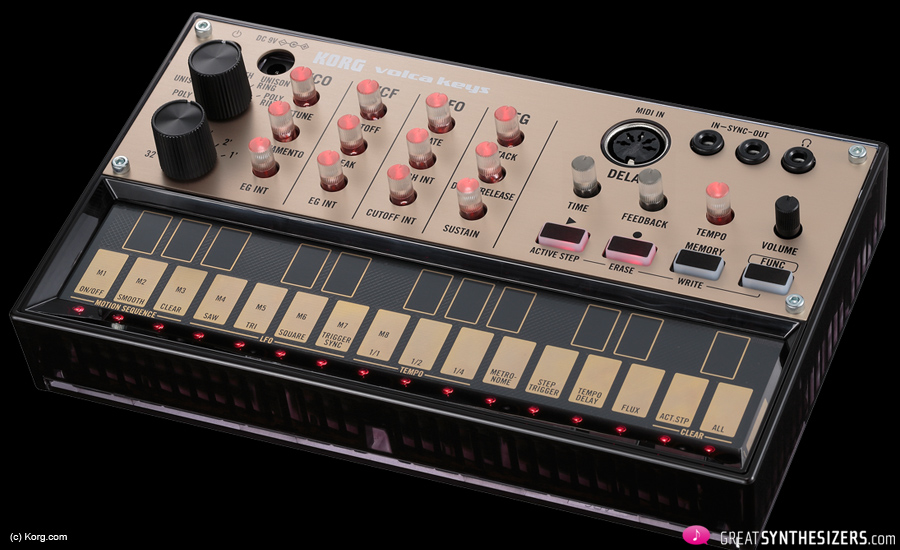 The Volca Keys is the more interesting synth of the three to me. It´s not only paraphonic of 3 voices, it has various unison modes, including a ring modulator, a fantastic filter, an analogue style delay, polyphonic sequencer with automation of most controllers, etc.

Aesthetically, it´s golden and doesn’t have a led screen like the other two. The touch keyboard looks more like a piano keyboard than the one on the Bass. 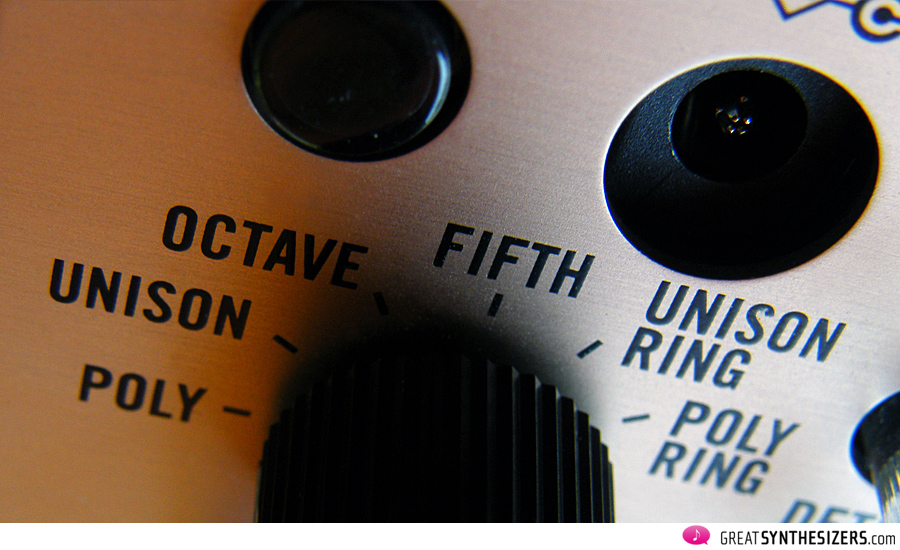 The Keys has various modes:

The next four modes are monophonic, use the Detune knob to fatten up the sound.

The last mode is something special …. 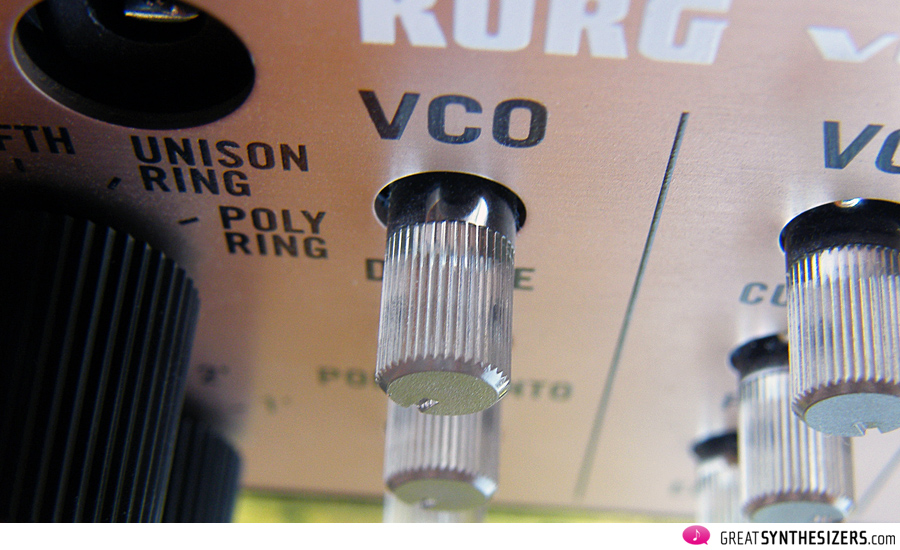 The VCO section has some nice functions, in addition to Detune, there´s also Portamento, and EG Init, which modulates the oscillator’s pitch with the envelope. A big knob transposes the internal touch keyboard by 6 octaves, but again not via MIDI. 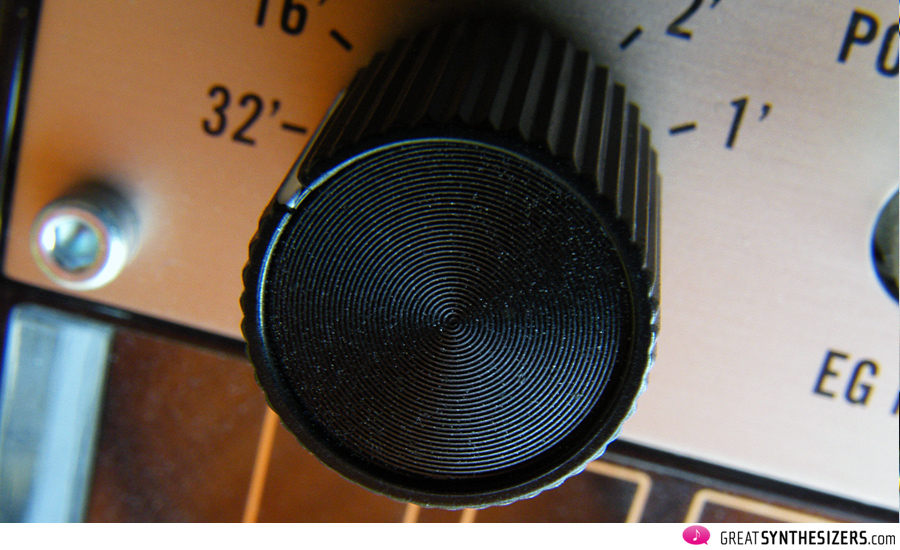 The VCF section has Cutoff and Peak knobs, along with EG Int. The filter is fantastic, it sounds so 70s, so rich. My friend Francisco Nicosia sent me some filter sweeps from his 700S so I could compare, and its lowpass filter sounds quite similar. Not identical, but similar. Again the difference may rely on the difference of their waveforms.

I can’t emphasize enough how well it sounds. One of the critics of new analog synths like Minibrute or new Moogs is that they sound good, but not as good or “analogue” as vintage ones. This is not the case here, I feel this one sounds as good as any good vintage synth. 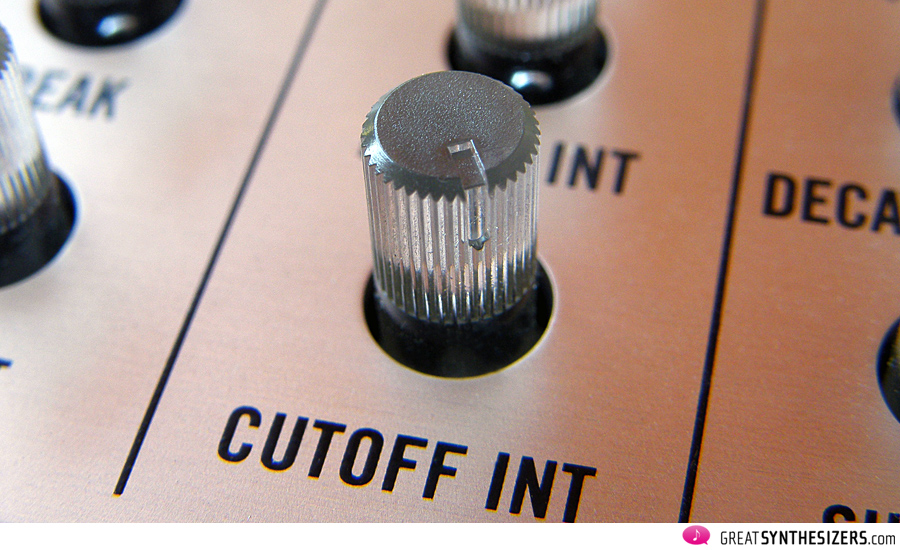 The LFO is simple, it has three waveforms (Sawtooth, Triangle and Square), and can modulate either the VCOs and/or the VCF. As the Bass LFO´s, this one also goes up to fast rates. There´s a simple envelope, with Attack, Decay/Release and Sustain, that controls the VCOs, VCF and VCA.

Finally comes the Delay, which is a very LO-FI analog type delay. It has Time and Feedback controls, the last one also works as effect level. I guess it´s based on the one found on the Monotron Delay. It´s so LO-FI that it generate all kinds of artifacts as you set longer delay times. It can be synchronized to internal or MIDI clock, or it can run freely. When sync´ed, the Time knob jumps from various timing figures like 8ths, and triplet, etc.

Don’t expect so called “studio quality” here, whatever that means because to me it adds tons of character and personality, something very welcome in a studio environment. 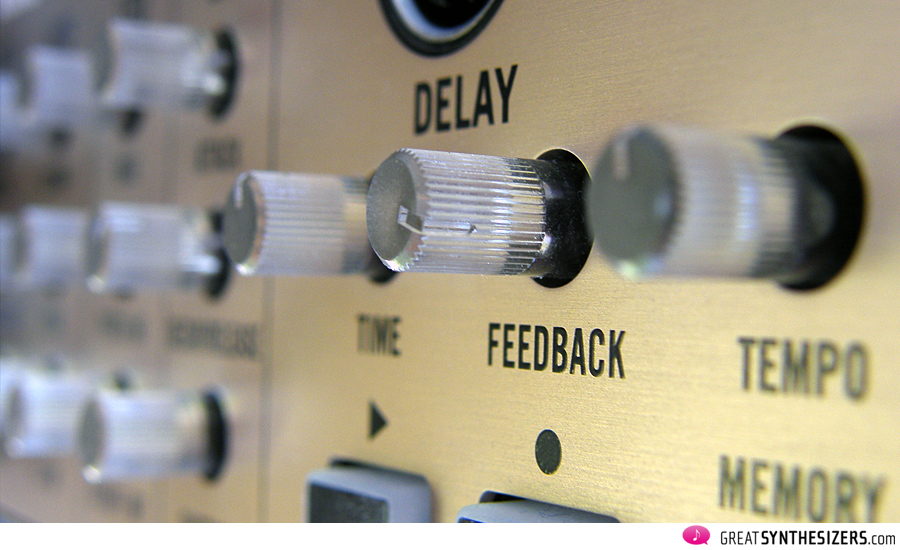 The sequencer is simple but quite creative and inspiring. Just set the metronome, play Rec and Play and there you go. You record polyphonically, and you can also record all knob movements except Peak. You can record notes without any quantizing, and you can divide the clock to half or ¼ so you can have 2 bars at ⅛ note resolution, or 4 bars at ¼ note resolution.

If you happen to have a Nord Modular G2, consider that every synth parameter is controllable through MIDI. The G2 can generate LFOs and envelopes and convert them to C.C.. I did a patch to take advantage of that, by making every parameter controllable from the G2 knobs, but also setting free the EG to control volume by adding an external EG to independently control the VCF. Additionally, I put an LFO controlling the Delay Time for chorus effects, velocity to VCF, Keyboard tracking to the VCF, vibrato control through the Mod Wheel, etc. 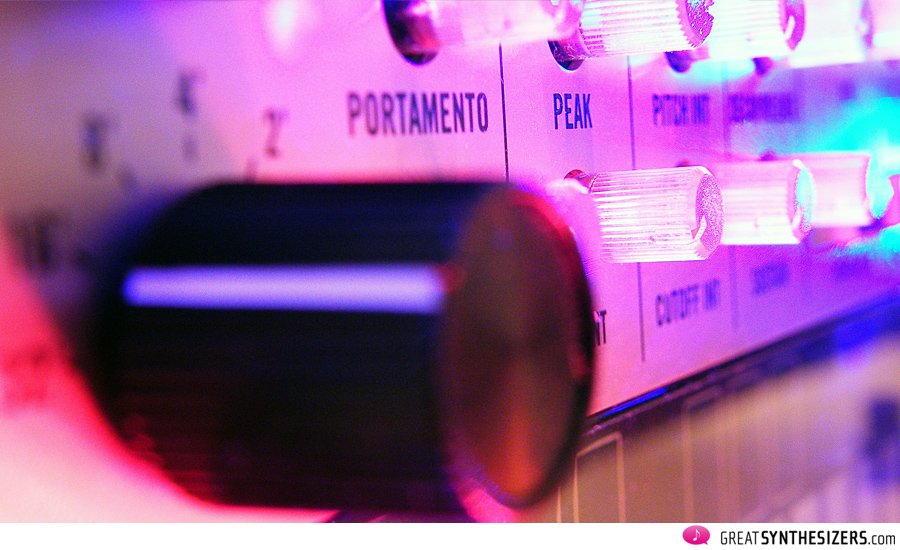 This is very interesting, and possibilities are huge.

The Volca family is a great addition to almost any studio. These synths sound great, they can play along with each other, they’re simple but can make relatively complex music, they’re extremely cheap and decently built. What else could you ask? 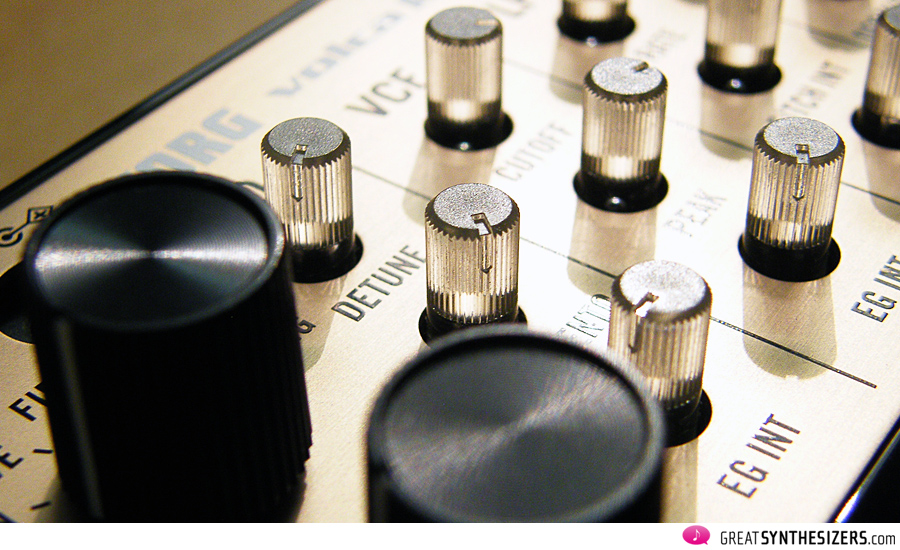 I don’t know why Korg made all this filter issue so confusing and maybe a little misleading. To me, the Bass filter is the one (maybe slightly modified) of the MS20. That´s not what Korg officially say. Why? Maybe they feel some kind of shame of using the same filter again and again (Monotrons, Monotribe, MS20 mini, MS20 Kit, plus the digital versions: MS20 Legacy (VST), IMS20 (for Ipad), DS10 (for Nintendo))? I just don’t know. Anyway, to have an MS20-esque with 3 VCO for 150 dollars or less, it´s a complete bargain.

I think the Volca Keys is a door open for a polyphonic analogue synth from Korg, with their computer tuned VCOs, computer parameter control, etc. The ARP Odyssey was announced and a prototype was shown, that means it´s probably on an advanced state. So I wonder what all those fantastic engineers and designers are doing right now. Even though I don’t know what it is, one thing’s for certain, it´ll probably blow our minds. 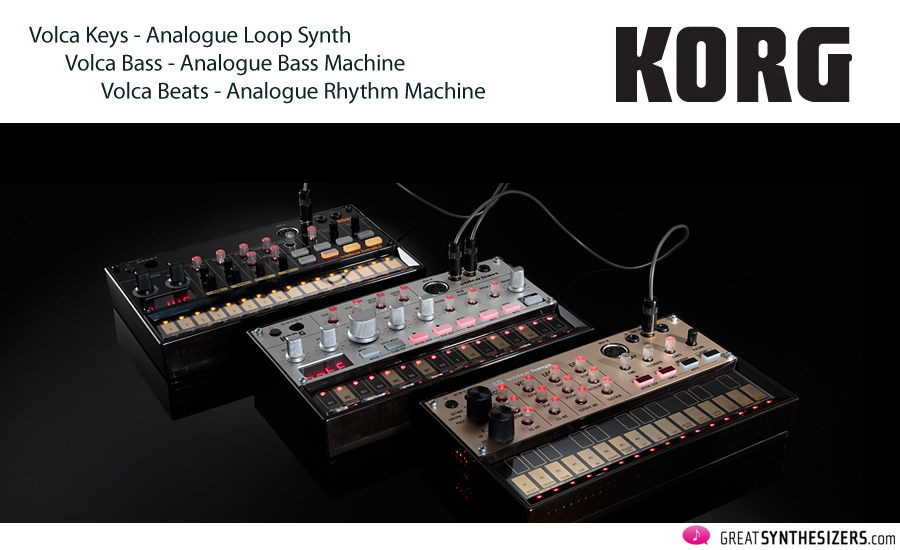 Some demos have sounds from an Boss DR-110. For some reason, some people adopted the DR as part of the Volca family, to the point of making its price rise.  Its size and format makes it easy to integrate, it also runs on batteries, and with a simple mod it can have a clock input in addition to its standard clock out. There´s no MIDI though.

The sound generation is 100% analogue, and it has more memory than the Volcas, there´s 4 banks (2 rom, 2 ram) of 8 patterns each, and you can chain them to create up to 2 songs. The sounds can´t be modified, but they sound so beautiful that you won’t feel the need to do it anyway.

PS: Special thanks to Nahuel Mijalovsky and Francisco Nicosia! 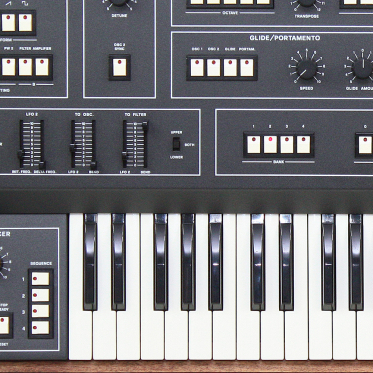