Some might consider the Korg PS-3100 synthesizer as an oversized MS-20. But this polyphonic instrument is – like its monophonic colleague – in a class of its own. Korg’s PS-series might include the best and most creative polyphonic analog instruments ever made (along with Yamaha’s big CS-synthesizers, of course). No other machines offer such characteristic and distinctive sounds … 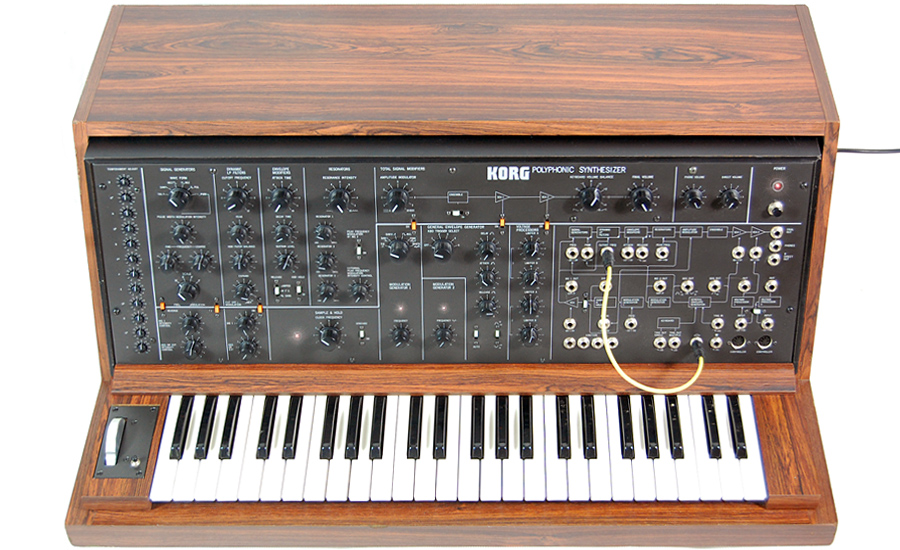 Of course, it’s always a question of personal taste and what sort of music you yourself tend to produce. But by comparing analog instruments you might come to recognize the difference between the mass of “nice” but rather ordinary synths, and the few absolutely “top” machines that set themselves apart.

It’s easy to explain the special status of a PS- or polyphonic CS-synth. On the one hand (PS-synthesizers), it’s fully polyphonic – 48-note polyphony, to be exact. As to the CS-instruments, the vast tone control via keyboard (not to be found on any other polyphonic synth of that time) is what makes them unique. 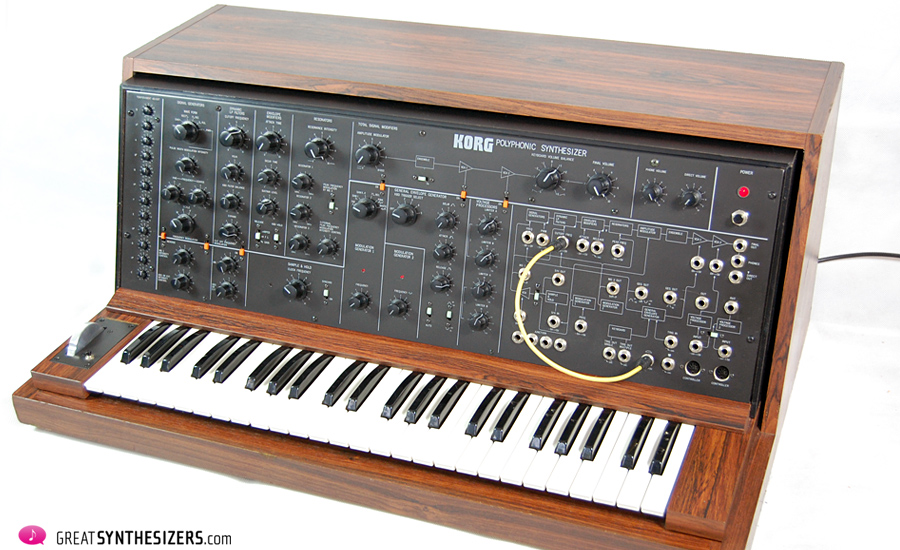 Korg designed one instrument as the basis for the PS-series: the PS-3100. The essence of the wonderful PS-3300 is in fact three PS-3100 (well, more or less). In 1978 – one year after release of the “original” series – the PS-3200 joined the family. This instrument represents some major changes in concept. Its disadvantages: there are no resonators, the env-philosophy has been changed and, somewhere along the line, the vivid character of the PS-3100 has gotten lost. Its advantages: the polyphony is still 48-notes with two independant VCOs per voice, and there’s the nice PS-3010 keyboard which puts it in a class of its own compared to the rather ordinary keyboard of the PS-3100, and, in addition, the PS-3200 has 16 programmable memories!

Some people (even those who have the complete PS-series) think the PS-3200 is the best of the bunch. But in my opinion, it’s the PS-3100 (ok, ok – the PS-3300, too). There is no substitute for those resonators, and the envelopes in particular have a characteristic class. Sometimes, of course, one VCO per note is not enough, but you simply (nice joke) have to link two PS-3100s … in stereo, to get a sound that will bowl you over! The PS-3300 might be the king of modular polyphonics, but in my opinion the smaller instruments are easier to handle and still have that sonic power (without a loss of that distinctive character). Need some more comparisons? The Juno-60 is a great substitute for the Jupiter-8, the CS-60 yields a lot of what we like in the CS-80, … small is beautiful!

Well, nearly everything about this instrument is extraordinary. But still there is a “mainly”, and that is it’s …

Polyphony: there are very few fully-polyphonic instruments other than the Polymoog. This is one of them! A 48-note polyphonic, patchable synthesizer! No danger of harmonies being cut off when you play long pads. Harmonic pile-ups of 12, 14 or more notes are no problem and give you a powerful, unique sound. Clusters of up to 48 tones are really no problem!

And by the way: the single VCO per note doesn’t mean the PS-3100 is a toy! I know few synths that sound that rich, organic and earthy. 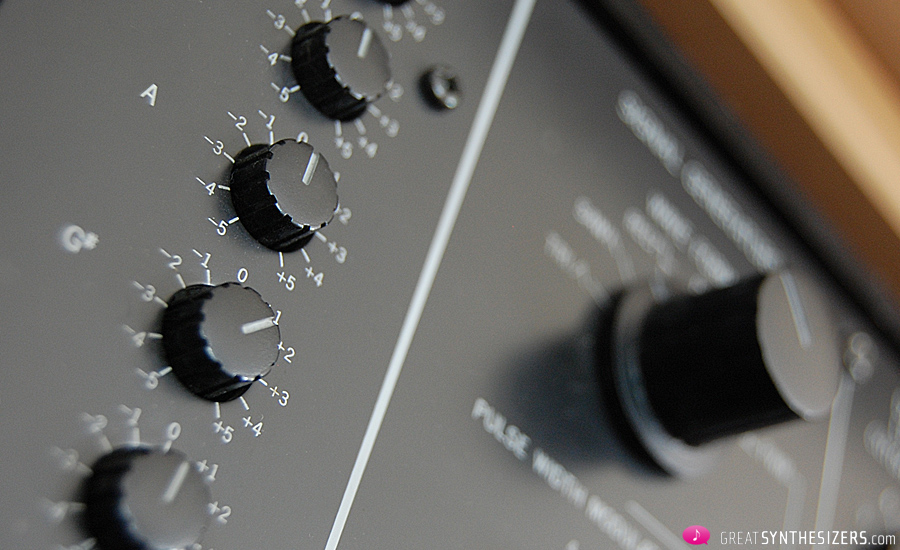 Resonators: 3 bandpass filters (with resonance) that produce a phaser-like sound. This module is the heart of the beautiful PS-3100. What a shame the resonators got lost in the process of developing the PS-3200.

Envelopes: there’s genious behind this! You have ADS (knobs) and R elease (switch, sort of a “preset”-function). Release is either DAMPED (very short, many of Vangelis’ soli sound that vivid and aggressive thanks to these extremely short PS-envelopes), or HALF or FULL. Sadly, these presets were also left behind with the PS-3200. Instead, you find a complete ADSR (all knobs), but the attack-time is different, and release is not that aggressive and snappy. 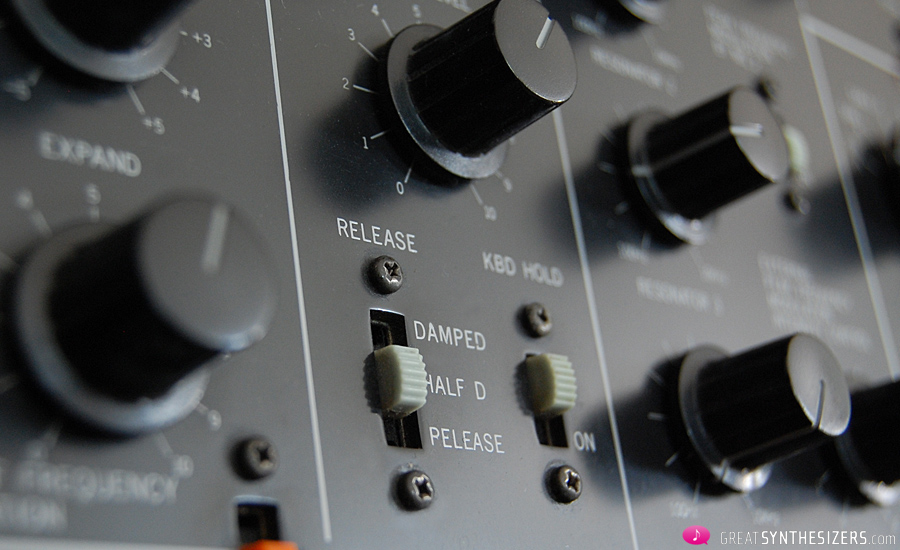 Well, attack … I need to say something about it: attack-time on the PS-3100 is somewhat over 2 minutes! (That’s a guess. I really should clock that one day …). I know no other synth offering this XXL feature. We always believe fast attack is the most important quality aspect of an envelope. Well, sometimes that’s true – nice basses need some short noise at the beginning (hello, ARP-2600) …

But whenever you hear the extraordinarily long PS-3100-attack, other musical possibilities come to mind – different, but no less dramatic. Combined with its HOLD-option, the small PS-3100 brings up some extremely lush pads. 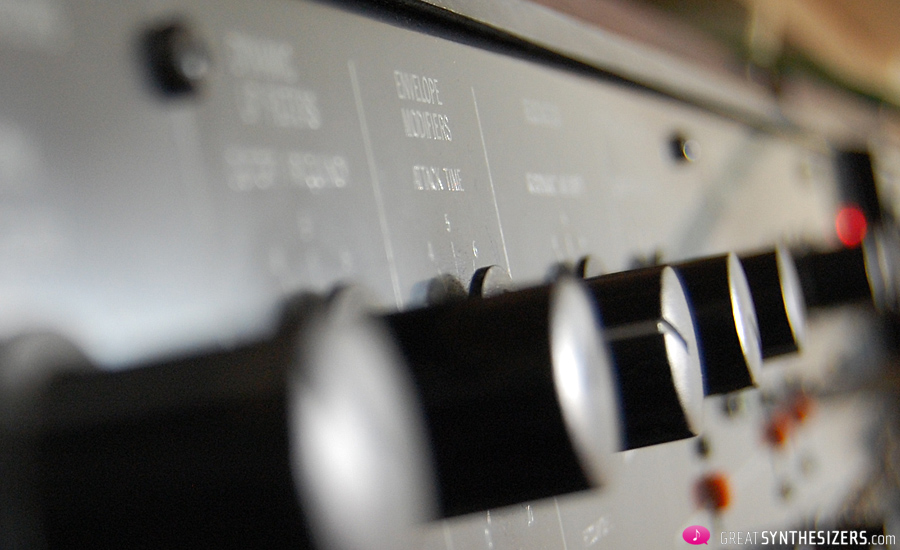 So this is how it works: turn up attack-time higher than 7, select HOLD, play some notes across the whole keyboard, sit down in front of the speakers (you might even sip some coffee), and … wait. First: … there’s nothing! Total silence. But the genious PS-3100 is in the midst of producing that nice harmony that you just can’t hear yet. (John Cage would have loved one of these for his studio!).

Then, after half a minute of “nothing”, you hear a mixture of tones, quiet at first and growing slowly. As if someone were turning up the mixer-volume in slow motion … And the sound grows, and grows, and gro… Finally, it’s overpowering, making you turn back the PS-volume (or filter frequency, whatever you do to reduce the volume again). But it still grows, and doesn’t want to stop … it’s fascinating, really. A polyphonic Tyrannosaurus! 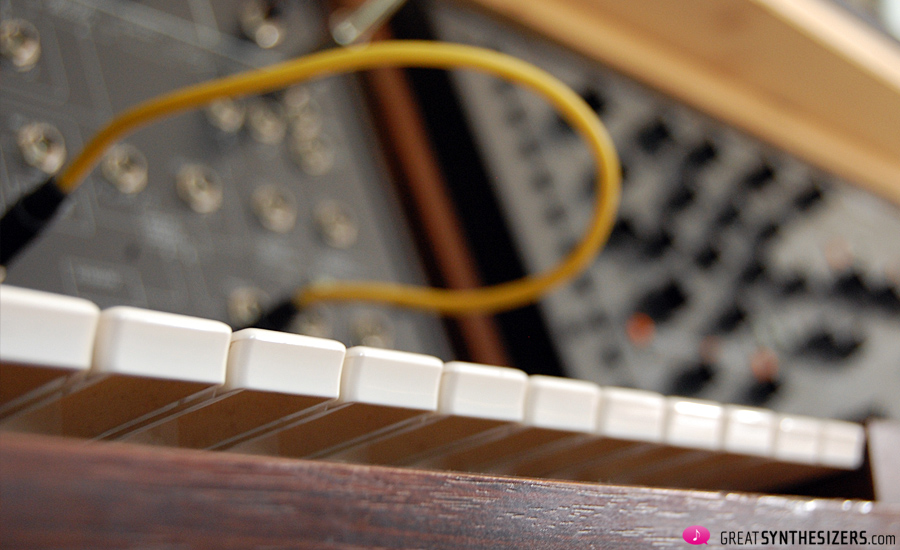 These endless attack-times are a wonderful musical feature, at least as important as fast attack-times (forgot to mention that they can be quite fast on the PS-3100 too, so you’ve got both worlds). It simply shows that Korg tried to make the best out of each single module (as with the wide range LFO that can even produce ringmodulator-like effects).

Sadly, the long attack-time is not to be found on the PS-3200. There, it’s rather ordinary, with a maximum of 20 seconds …

By the way: attack and release can be voltage-controlled externally! Play a nice solo, control the attack-time with the help of that massive aluminium wheel and modulate the resonators by one of the LFOs (and the regular filter frequency by the other) … Welcome to the world of the PS-3100! 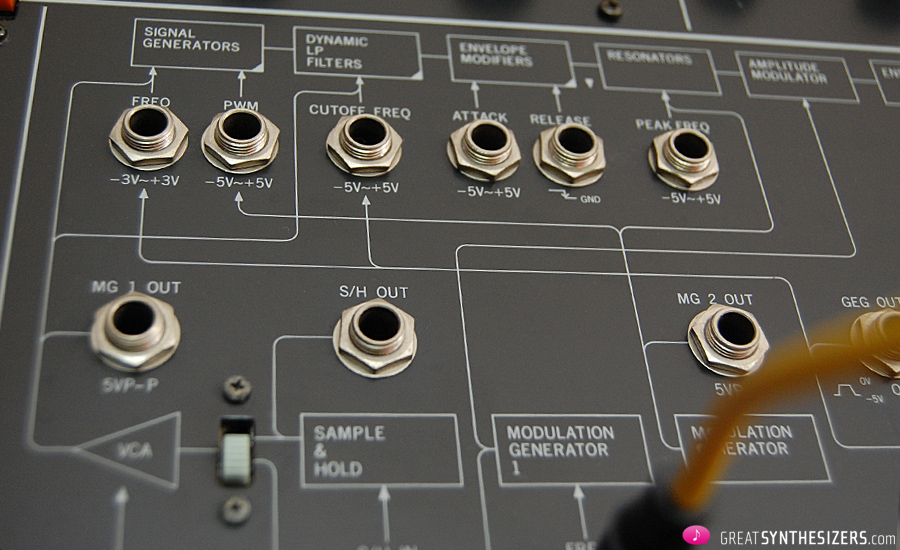 Patch field: it’s one huge block, as with the MS-20. Therefore, patching is far easier than on the PS-3200/3300 (a slightly confusing layout there is not the perfect set-up for creative musicians). Another reason why the small PS-3100 can be the best choice for you …

LFO 1 (and LFO 2 and Sample&Hold): as mentioned above, LFO 1 is a cracker: ranging from 0,01 Hz up to 2 kHz, it gives you wide sonic power … A simple vibrato? Ringmodulator-like effect-sounds? A noise-modulated bass? This LFO is very versatile. It puts 6 waveforms at your disposal (sine, positive saw, negative saw, pulse, white noise, pink noise) and has a frequency modulation CV input! LFO 2 is an ordinary triangle low-frequency oscillator (for standard vibrato / wah wah effects, but internally it’s also routed to the resonator’s frequency input, which is great). And Sample & Hold is there, too. It has its own clock, but can also be synchronized to LFO 1. 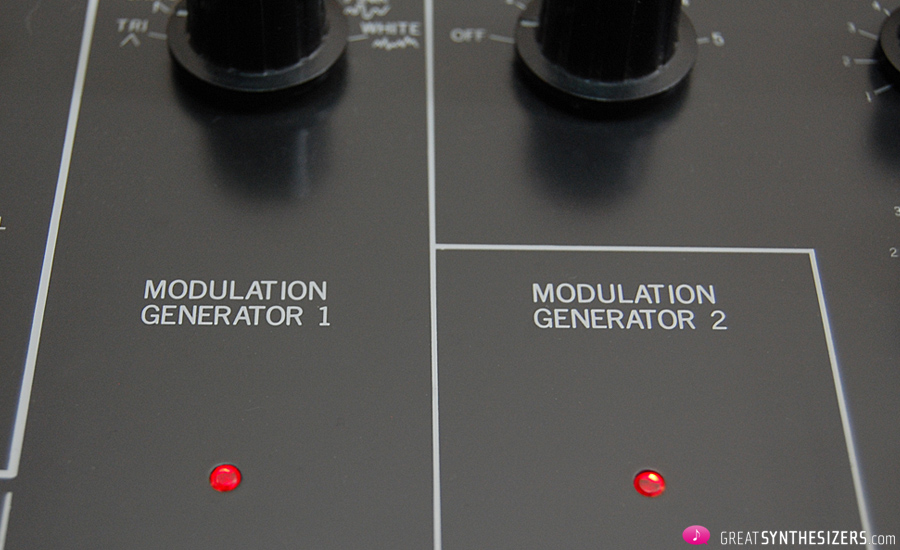 In terms of musical results, using noise as a source of modulation is not that effective. But still, it’s nice to have this option. What a shame that noise is not offered as an independent sound source!

There are many other fascinating aspects about the PS-3100, but now let’s go ahead and talk about …

Sound character and musical power are the final arguments (the pros and cons) of an instrument. I’m quite sure not many synths out there have the deep earthiness characteristic of a PS-3100. Its sonical potential is impressive: nice basses (no Moog, but still powerful and aggressive), perfect pads (thanks to full polyphony and lovely resonators), extreme effect-sounds (due to LFO1, S/H, voltage processors, vast patch options), and much, much more.

The hightlights of this instrument: 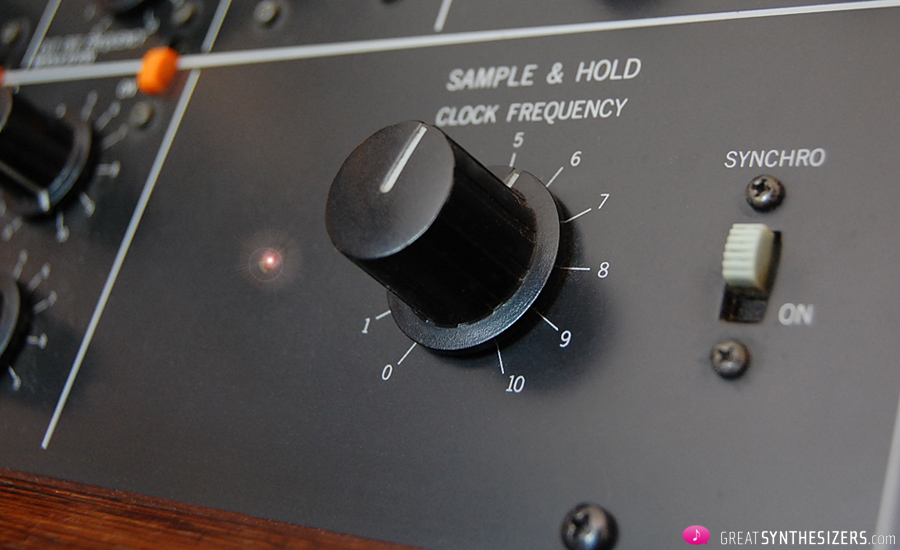 Some of the “cons”

And then, the filter resonance is weak. No self-oscillation here. Which is surprising, thinking of the diabolic MS-20 filters.

Then again, there are no proper CV/Gate connections. Well, this is a full polyphonic instrument, so how should that work? But we can suggest a very clever solution: Kenton Electronics offers a full-blown MIDI kit. It’s not really cheap, but considering the huge sound potential of a PS-3100 in your studio-setup, it might be worth the money! 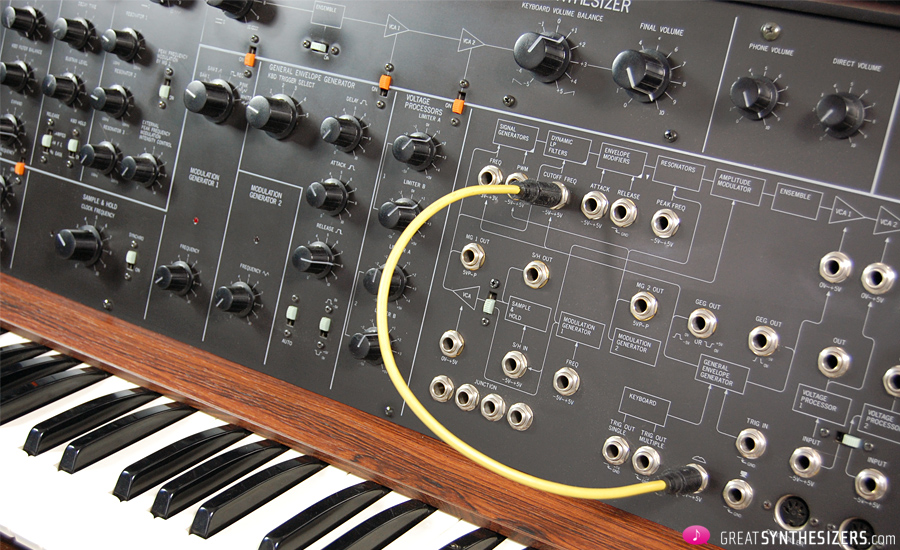 Last, but not least, the PS-3100 is a monster (!) of an instrument, with thousands of electronic parts inside. So keep in mind that this Korg synthesizer might need some service every now and then. It’s certainly not unreliable (not at all) – but well, it’s nearly 40 years old! Every PS-owner should have octave dividers in stock, for example. They are not expensive (20 USD a piece?) and the PS-3100 has 12 of them. There are 24 in the PS-3200 and 36 in the PS-3300.

And keep an eye on the condensers of your PS-synthesizer! They are filled with fluid that might possibly leak (as with a battery). Don’t wait until it happens – that’s too late. Another reason for a service-check every 3 or 4 years! 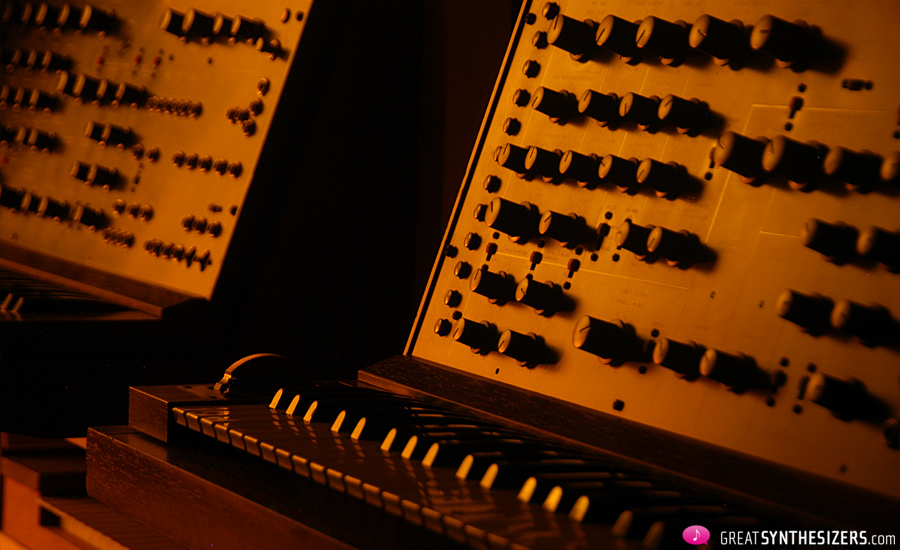 What’s it worth nowadays? 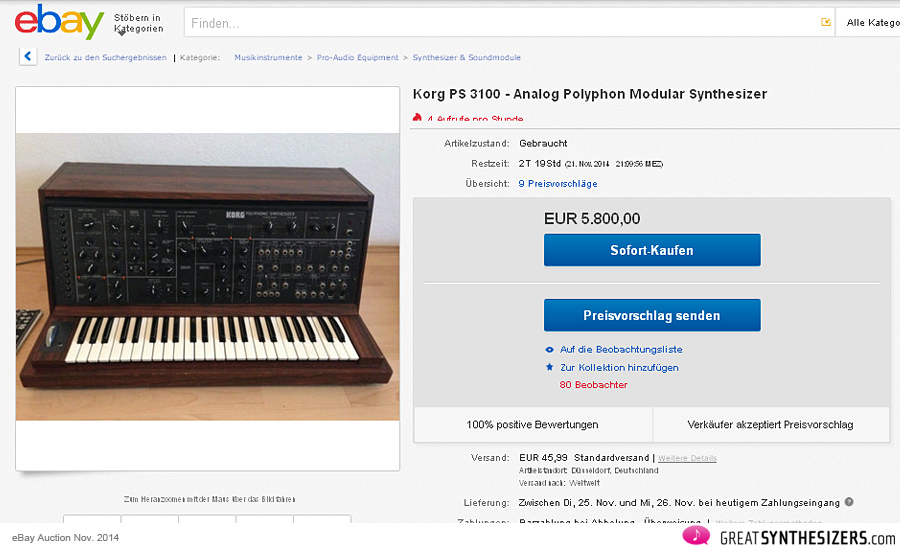 Being enamoured of all that sonical glamour, I can imagine there is no limit at all. My personal opinion, of course. If you can, try to find an instrument with MIDI … (that would be the chocolate on the Sundae). 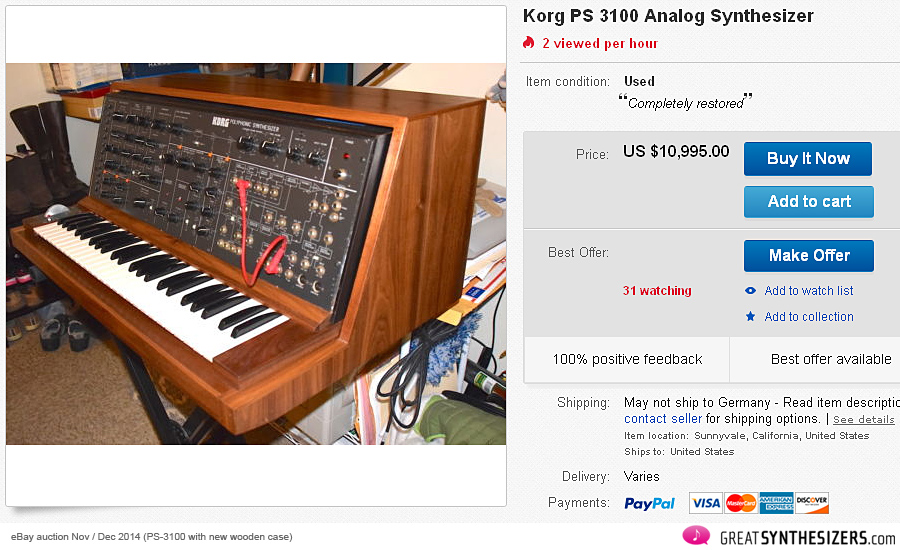 From the standpoint of uniqueness, there will never be an alternative to the Korg PS-series. At least not without the same constructural extravagance. And in all probability no synth company will ever again produce anything similar to these wonderfully complex and intuitive instruments.

Here you have it: the PS-3100 is a massive 48-voice analog synth with resonators (triple resonance bandpass filters), a flexible patchbay and with a uniqueness all its own. 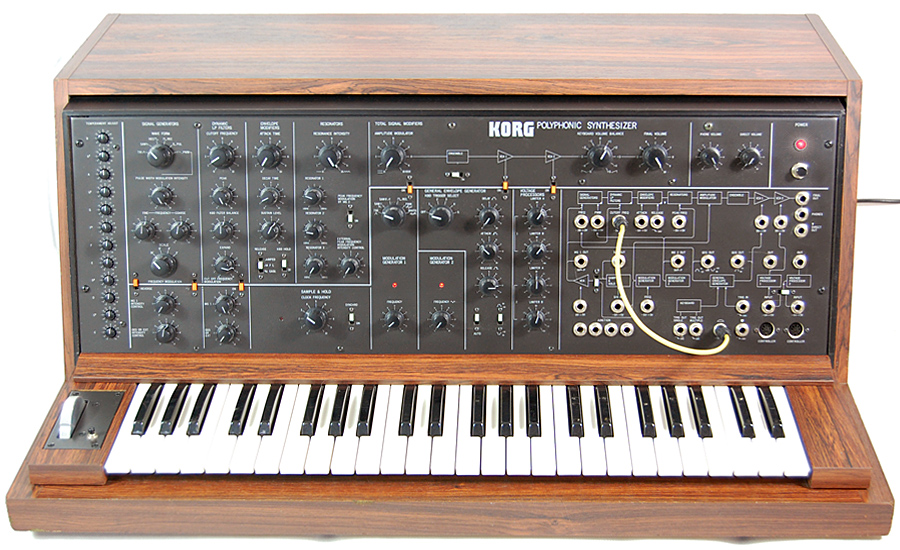 We have put 40 minutes of audio material at your disposal. Besides PS-3100 solo soundfiles, there are quite a few mixed audio files. The instruments used along with the Polyphonic Synthesizer 3100 are Oberheim OB-8, Yamaha CS-60, Yamaha CS-80, PPG Wave 2.2, Elka Synthex, Roland JD-800 and Roland’s TR-808 drum machine.