Just one glance and you’re itching to get in there yourself … to do magic and create complex things. That elaborate sequencer (well, really, those 4 sequencers tied up in a neat elaborate package) from Koma Elektronik is a breath-taking baby. Tons of features packed into a 19” rack (7 units high).

A closer look reveals a very special detail: a small cv-recorder with 7 channels (in addition to those 4 sequencers), which can serve as the master of the whole unit. 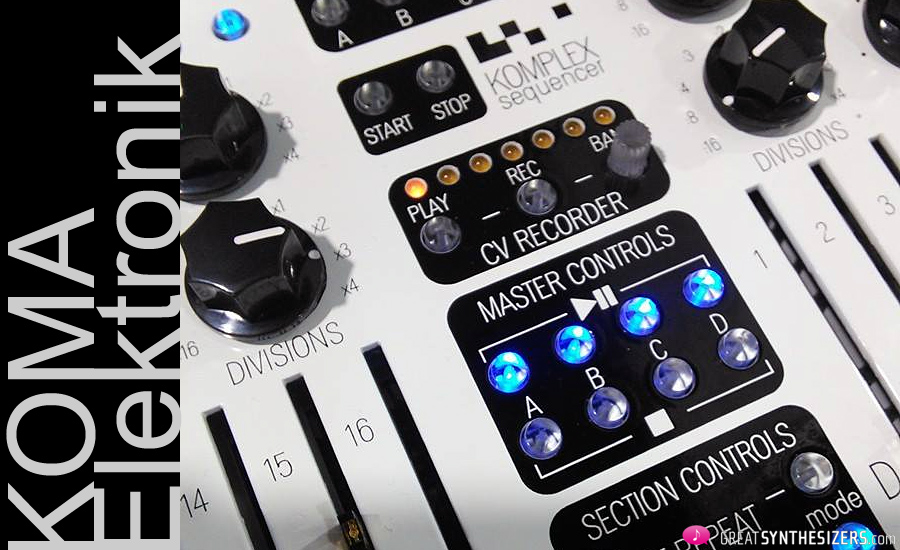 LOS ANGELES, CA, January 22, 2015 – Today, KOMA Elektronik GmbH is pleased to announce its latest release: the KOMPLEX SEQUENCER, which enables musicians and producers to construct complex musical patterns via both MIDI and CV/Gate, by the means of sequencing the sequence.

The KOMPLEX SEQUENCER is a musical monster built around four full-featured 16-step sequencers that allow and invite the user to use one or more of the sequencers to sequence the other one. The KOMPLEX SEQUENCER has no screen or submenus; all features have their own dedicated controls, and all features have their own dedicated in- and outputs on the large 86-point patch bay.

Each sequencer has its own start and stop buttons, a quantizer (switchable between chromatic, major & minor scales), one-shot-mode and five different play modes (forward, backward, ping-pong, ping-pong reversed, random). You can of course set the output range per sequencer as well, choose between 2V, 5V or 9V.

Ever since the groundbreaking work of krautrock legends like Tangerine Dream, Klaus Schulze, and Manuel Gottsching, the sequencer has been a key tool for many electronic artists coming from the Berlin scene since the 1970s, ranging from techno producers to experimental ambient artists, all using the repetitive character of the sequencer to create innovative music. We now think it’s time for the ultimate sequencer, one that comes with so much power and connectivity that gives the user the possibility to transcend the sequence from a repeating pattern to an ever evolving cadence of sound.

By patching both internal and external CV-sources to the patch bay of the KOMPLEX, the user is able to control the parameters for Sequence Start Point, Sequencer Clock Division, the amount of the Glide between the steps, Skip Step, Repeat Step and Repeat Length. Also, you can Transpose the whole sequence via CV, start it with an external trigger signal and use, for example, an LFO or another sequence to control Sequence Length or Gate Length. This adds up to 20 in- and outputs per individual sequencer, which, when you include the CV recorder outputs, adds up to 86 CV patch points on the whole machine, all conveniently located on the front panel.

Designed as a large 19″ 7U surface, the KOMPLEX invites the user to plug and play. The LED’s on the 64 step-sliders show the active step, the 64 corresponding RGB LED’s under the sliders’ push buttons allow you to set the sequencer start point, choose active steps, set the Glide per step, set the Gate per step, set the amount of Repeats per step and Repeat mode. Besides this, they also choose the output MIDI channel for each sequence. Extra features include a 7 channel CV-recorder whose bank selection is controllable via CV and master start/stop to start/stop all sequencers at once.

The KOMPLEX SEQUENCER is compatible with almost all synthesizers that accept CV/Gate and/or MIDI. No matter if you have a small modular system or a studio filled with vintage synths, the KOMA Elektronik KOMPLEX SEQUENCER will open a whole new world of playability and creativity, allowing you to start creating where all other sequencers stop.

The KOMPLEX SEQUENCER will be available at select retailers worldwide in Spring 2015 for an MSRP of $1500.00. To learn more about the KOMPLEX SEQUENCER or KOMA Elektronik’s full line of electronic musical instruments and accessories, please visit www.koma-elektronik.com. 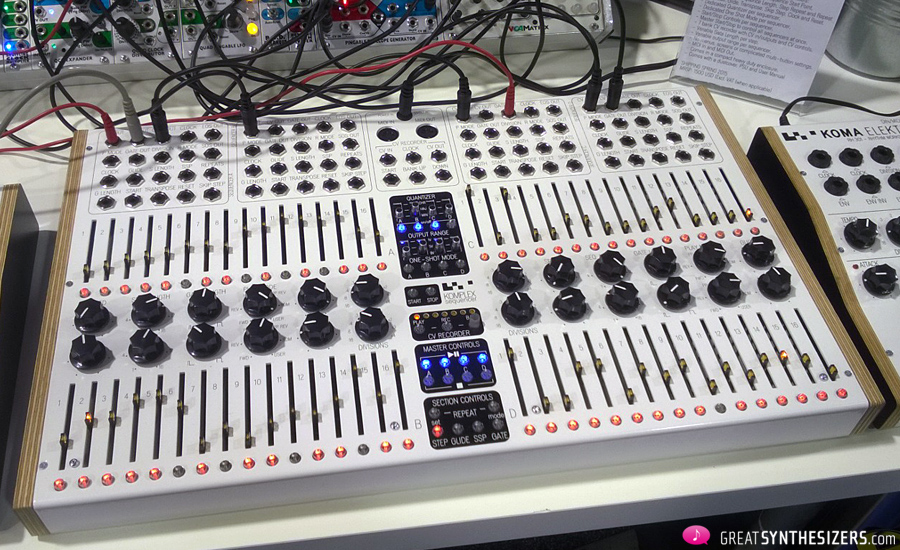 Further information can be found on the KOMA Elektronik facebook site:
https://www.facebook.com/KOMAelektronik

Finally, a Youtube video for a look at the sequencer (NAMM 2015):